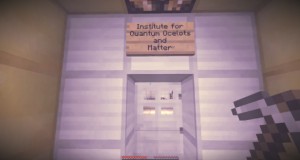 A new software package provided by Google will now ensure that this feat is even more realistic by adding in quantum physics, which is an area of the laws of nature that was previously not included.

The new mod is called qCraft and allows players to experiment with entanglement, objects that are able to exist in a ‘superposition’ of numerous states at once, and quantum teleportation.

Caltech quantum mechanic Spyridon Michalakis worked together with Google to create the mod. In a blog post that he wrote about the project, he said that he hopes that the mod will assist school-aged individuals and beyond to understand the world of quantum physics easier. Google has also partnered with MinecraftEdu, which is a project developed by educators from Finland and the United States to use Minecraft as a teaching aid for students.

Although the qCraft mod was just released last week, there are many Minecraft fans who are already showing off many of the unique feats that they can achieve using quantum physics within the game. In one video, a Minecraft player recreated the well-known Schrödinger’s cat thought experiment; in other videos, players have started creating how-to videos and tutorials which showcase how they achieved certain results in the game.

Google’s interest in quantum physics, however, extends beyond their recent incorporation of the laws of nature into Minecraft; earlier this year, they began a new research effort into quantum computing.