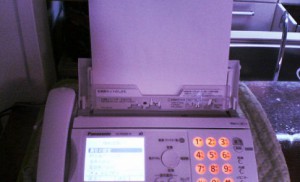 New reports claim that Japan’s reliance on the increasingly outdated fax technology may be to blame for the failure of warning citizens about the danger associated with Typhoon Wipha. The Japan Meteorology Agency defined Typhoon Wipha as a strong “once a decade” storm; its strength brought heavy rains that ultimately led to deadly mudslides responsible for the deaths of 28 people and over 20 other individuals that remain unaccounted for.

The issue is that the Tokyo Metropolitan government sent a fax transmission to warn the affected local governments. The Miyake government received the warning and advised all of the residents to evacuate as soon as possible, but the office staff in Izu-Oshima had already left and the officials didn’t see the faxed advisory until almost midnight, six hours later. At this point, it was already deemed too dangerous to ask the residents within the area to leave their homes. Although Japan has one of the world’s fastest internet connections, most of corporate Japan and its officials continue to rely on fax machines. Fax machine technology itself became fairly widespread in Japan during the late 1970s and early 1980s.

Despite the issues associated with using the antiquated version of fax technology, the Tokyo Metropolitan government is still defending its continued use of the methods. They claim that it has worked well in the past and that it hasn’t led to any serious issues previously. One official said that that the government will keep the current fax system in place, but that they have also collected the mobile numbers for disaster prevention and control at the local governments in the area so that they may contact them directly when fax communication fails. The government maintains that sending a fax is the most efficient warning option available because it allows them to transmit all of the advisories at once.