Google is currently working on patenting a temporary electronic tattoo with Motorola that would be able to stick to the user’s throat. The patent, which was published last week, states that the tattoo would be able to communicate with smartphones, tablets, gaming devices, and various types of wearable technology such as Google Glass. It would work similar to a Bluetooth-style connection and would include a power source and microphone. Users would be able to communicate with their devices via voice commands without having to wear an earpiece or use the Google Glass headset.

Another possibility mentioned in the ten page patent document states that the temporary electronic tattoo could also be used as a lie detector. This would be done by including a galvanic skin response detector, which would able to detect the reactions of users. “Galvanic” is a term that is in reference to the way that some surfaces and skin are able to conduct electricity. Outside of these options, the document even mentions that possible uses could include making incoming and outgoing audio clearer, such as for use with a smartphone. Clearly, while there are many options available for the use of the technology, Google hasn’t chosen any option specifically prior to the patent filing.

Images attached to the patent filing depict the tattoo with a size similar to a postage stamp or a small band-aid. The documents also mention that in addition to being able to stick to the throat with the use of an adhesive, the tattoo could also be used on a collar or a band around the user’s neck. Although it remains unclear about how this upcoming temporary electronic tattoo will be used, there are already an array of possibilities that are being presented. As wearable technology such as Google Glass continue to evolve, there will be countless additional opportunities to make use of options such as the upcoming temporary electronic tattoo. 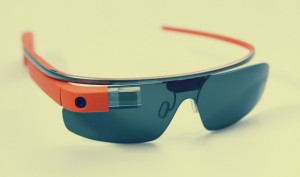